Ian Woodhouse and Paul Rowland (Escort Mk2) returned to Donington Park and took victory on the Imperial Commercials Volkswagen Donington Rally, round 6 of the Motorsport News Circuit Rally Championship, on Sunday 5th March. For the second successive year Alan Kirkaldy retired from the lead on stage 6 of this 8 stage event, after dominating this years event from the start.
Kirkaldy and Cameron Fair’s Escort Mk2 was 10 seconds up on a greasy and very wet opening stage with Steve Quigley/Peter Littlefield‘s Renault Clio in 2nd, just one second ahead of Ian Woodhouse/Paul Rowland with Martin Hodgson/Tony Jones‘ Escort and John Griffiths/Nigel Wetton‘s Impreza sharing 4th place. Bruce Edwards/Jim Smith‘s Darrian went off at the Old Hairpin and MSN Championship leader Paul Swift spun out at the Melbourne Hairpin, “I had started to grow in confidence and then just went straight on, locked up, spun 360 and it was over,” Swift explained. 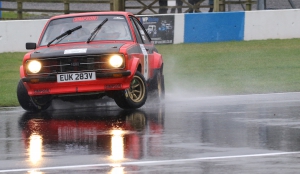 < Seb Perez / Carl Williamson , Car 26, trying to cope with the conditions.
Kirkaldy doubled his lead in the torrential rain on stage 2, ahead of Quigley with Griffiths up to third. He continued to build on his lead and by half distance was over a minute clear. Quigley had
suffered from fuel surge early on, but as the track started to dry out, he was forced to give best to both Woodhouse and Hodgson, with only two seconds separating them. Griffiths was in fifth despite hitting a chicane on stage 3.
Kirkaldy was 1 second quicker than everyone on stage 5, but barely into the sixth stage and he coasted to a halt. “It just died. We tried fuses but it just wouldn’t fire up,” he explained. Woodhouse was therefore the new leader, 5 seconds up on Hodgson with two stages remaining. He added 4 more seconds to his advantage on the penultimate stage and finally claimed his win by 10 seconds. “I just tried to be tidy and consistent and it paid off,” he said. Hodgson was a comfortable second; Bell usurped Quigley for third with a stage to go, with Mark Jasper claiming fifth as Griffiths struggled with a misfire but held onto sixth. In seventh Steve Tilburn/Jack Tilburn‘s Escort recovered from a “draggy clutch and stall” on SS6, while Tom Walster/Jamie Vaughan‘s Suzuki Swift flew on new tyres for the last two stages, to claim 8th, just ahead of Simon Belcher/Peter Butler‘s Impreza.

In the classes, Julian Wilkes/Will Rutherford‘s Nova was never headed in Class 1, taking victory by over two minutes from Jonathan Hudson/Adi Collins‘ Suzuki Swift. Paul Sheard/Shaun Hughes led Class 2 from start to finish, despite a grassy excursion at Coppice on stage five. Paul Rees/Paul Briggs‘ Astra kept Mark/John Burton‘s XR2 at bay for second until the gearbox stuck in second gear on SS4. Rees took some time back but suffered more gearbox issues and had to eventually settle for third after breaking a drive shaft on the final stage.  Class 3 was Quigley’s domain, with Tom Walster a clear second with the Escorts of Stuart Cogger/Ade Summers and Robin Adams/Ray Keith completed the top four. In Class 4 it was Woodhouse from Hodgson, Jasper and Tilburn, while Bell topped Class 5 from Griffiths, Belcher and Smith.
Most of the Dukeries MC crews had a successful day with three finishing in the top 10 of a very competitive 80 car field. John Griffiths/Nigel Wetton finished 6th overall although earlier in the event they had been running as high as 3rd. Tom Walster/Jamie Vaughan had the opposite experience, struggling for grip in the torrential rain but gaining time as the stages began to dry out to eventually finish 8th. Simon Belcher/Pete Butler were also among the early leaders but dropped back a bit after they nudged a barrier on Stage 6 and experienced some overheating. After a successful repair they went on to finish a very creditable 9th overall.
Stuart Ranby/Ian Bass were one of many crews who struggled in the early rain but they continued and set some much better times as the stages became less wet!  In the battle of the Sierra’s it was Anthony Cowpe/Dave Simmons who just edged out Leslie and Tom Parrott, whilst Tom Bryan‘s debut as a driver in Dave‘s lovely Escort Twin Cam was a success, coming home in 42nd place.  Blake Morris/Emlyn Evans claim to fame in the red Ford Ka was the lurid spin which was caught on camera (completely missing out the Old Hairpin) and used on the TV programme to illustrate the atrocious driving conditions. After getting a very last-minute call up from the Reserve list, Michael Simpson/Jonathan Rollins (Mini) had to start at the back, but they made progress during the day to finish 47th overall and 6th in class.
No so lucky were Dave Wood/Ian Faulkner (Evo7) who made a misjudgement in the torrential rain on Stage 1 but continued and set some cracking times making up 45 places during the rest of the day. However most disappointed were Stephen & Catherine Booth (Escort Mk1) who had been going very well all day, but were forced to retired with a failed clutch on the penultimate stage.
(Acknowledgement to Peter Scherer)
paul.rees2018-02-02T16:08:40+00:00