Who will win the 2018 Imperial Commercials Volkswagen Donington Rally?
Reigning Motorsport News Circuit Rally Champion Ian Woodhouse accompanied by co-driver Jason Leaf, returns to Donington Park on Sunday’s Imperial Commercials Volkswagen Donington Rally, heading a capacity entry of 80 cars. Having already having won this event in 2016 and in 2017, Ian will be aiming for a hat-trick on Sunday, but that will be a challenge given the level of competition on the event. 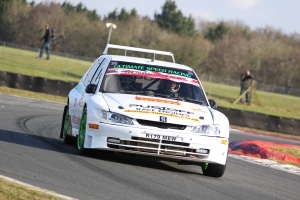 Starting at 2 on their first visit to Donington, are the current leaders of this seasons Motorsport News Circuit Rally Championship, Chris West / Keith Hounslow in a Peugeot 306 Maxi Kit Car. This is no ordinary Peugeot 306; it is built for competition and seems ideally suited to the Circuit based Stage Rallies. Chris and Keith won the last event at Snetterton, just 5 secs ahead of Ian Woodhouse / Jason Leaf.

At 3 are Mark Kelly / Andy Baker (Ford Escort Mk2 2500cc) who have been very competitive this season and won the MSN Circuit Rally at Brands Hatch in January. Car 4 is Alan Kirkaldy / Patrick Walsh in the Swift Group supported Ford Fiesta R5+. Allan, who comes from Fife in Scotland, has had the misfortune to break down whilst in the lead of both previous Donington Rallies. This time he is accompanied by the vastly experienced Patrick Walsh, so lets hope he has better luck this time.

Car 6 is Joshua and Tamsyn Davey (Darrian T90) who come all the way from Truro and had great results on the first two MSN Championship events but gearbox issues put pay to their early challenge. They are now back and will take heart from the fact that a Darrian (driven by Ashley Field) has won two previous Rainworth SKODA Dukeries Rallies here at Donington.
A late entry has been received from Graeme Bell / Russ Radford (Car 82) in the MEM Proton Satria. This 4-wheel drive car complete with a 2500cc Millington engine certainly looks and sounds the part and Graeme & Russ will definitely be in contention. They won the Dukeries Rally here last August and have been previous winners at Cadwell Park.
Outside the top 10 there are several other crews who could upset the form book.

The action starts at 9.20 am and there will be seven stages of rallying at close quarters with cars starting at 30 second intervals. The full entry list can be found in the Competitor section.

Tickets are available in advance until midday on Thursday 1 March at £13 with special rates for teenagers and free entry for children aged under 13. For more information and to book click HERE

The Official Programme will be available on the day at Donington sold on our behalf by members of the Clipstone Scouts. The 20-page programme priced at just £3 includes all the stage maps, the entry list and timetable plus lots of other information.