After running as high as second during the 2015 Dukeries Rally back in October before a broken gear linkage put pay to their challenge, Ian Woodhouse and Paul Rowland (Ford Escort Mk2) returned to Donington Park and took victory on the Imperial Commercials Volkswagen Donington Rally on Sunday 6th March.

It was stunt driver Paul Swift with his wife Jessica (Ford Escort Mk2) who coped best with the greasy and icy stage conditions on SS1 to post a time 17 seconds clear of their nearest challengers Graeme Bell / Russ Radford (MEM Proton Millington).  By stage 3 Bell had retired with radiator problems and it was Alan Kirkaldy / Gary Muir (one of four quick crews from Scotland) who took up the chase and set three successive fastest stage times in their 2500cc Ford Escort, to be only 4 seconds behind the Swifts at the halfway point. 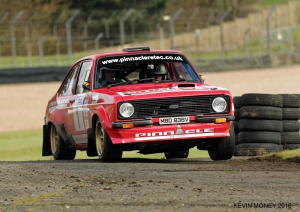 After a relatively cautious start Woodhouse/Rowlands were up to third but were closely followed by former Scottish Champions Gordon and Gary Adams in another powerful Ford Escort Mk2.

Things started to change on the afternoon stages with Swift being forced to retire with a broken rear axle on stage 5 that left Kirkaldy with what appeared to be a relatively comfortable 27 sec lead.  However, this was where Woodhouse / Rowland made their big push, setting fastest times on stages 5, 6 and 7, and when the diff failed on Alan Kirkaldy’s car on stage 6, they took the lead. Behind them there was a very close contest for the remaining podium places with Adam just fending off the hard charging Andy Fraser / Michael Calvert (Darrian) who were fastest on the last stage, with Paul Diamond / Steve Cox in another of the powerful Mk2 Ford Escorts 4 seconds further back in 4th place.

Paul Alexander / Abi Haycock were 5th overall and won Class 3 in their 2 litre Escort whilst the winners of Class 2 for cars up to 1600cc was John Marshall/ Chris Pattison in the MG ZR.  Jonathan Hudson / Adi Collins in a 1400cc Suzuki Swift GTi were the winners of Class 1 whilst Class 0 for the 1 litres Micras was won by Russell Balogh and Rob Ginn. 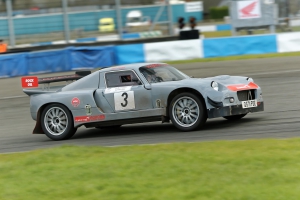 ng in the top 20 and scoring good points for Dukeries MC in the EMAMC Club Championship.  Not so fortunate were Craig Stevens / Maddie Evett (Fiesta Mk2) and Des Moody / Ian Haynes (Ford Escort RS) who both retired with blown engines early in the day.

So a second successful stage rally at Donington Park, and thanks go to our sponsors Imperial Commercials and Volkswagen Commercial Vehicles, all the organising team, the stage set up crews and all the marshals including a contingent from the Donington Marshals Club.