Henderson had opted for a super soft tyre on the opener, with most of his rivals having gone for wets. “Maybe it was a gamble but then I changed to softer again for stage two,” he explained.
Quickest again the lead was up to 13 seconds as both Roskell and Griffiths had followed Henderson’s early choice and lost out. “It was the wrong choice,” said Roskell, “we ruined them,” Griffiths added.  Morris was still in fourth, but had stiffened the Darrian’s set up and opted for a harder tyre, “it felt much more stable,” he confirmed.  After admitting to being over cautious on the opening stage, Dukeries Andy Scott and Laura Connell had moved their Fiesta S2000T into fifth, with Jasper slipping to sixth.

With another 11 seconds added to his lead on stage three, Henderson was looking comfortable, but behind it was getting desperately close.  Roskell was still second, but only one second up on Griffiths and Morris, now tied in third!

However, it was all change on the next stage. “I have to stop trying different things and stop being so ambitious,” Henderson explained, after his lead grew to 30 seconds.  It was Morris now in second with Roskell having retired from second place. “I had decided to up my game and on the first lap I was flying. As we pushed onto the Craner Curves the red light came on, we had snapped the belt idle pulley and it had punctured the radiator,” he said.  Griffiths was still third, from Scott and O’Donovan, but Jasper was now running two-wheel drive on his Metro 6R4 as his front diff had failed.  The conditions were well suited to the Darrian and Morris was on a mission, but Henderson still had the edge by a second on stage five and continued to increase his lead.

Over the final two stages Henderson continued to lead the way, taking fastest time on every stage to secure a 38 second victory.  Griffiths had decided to push harder to try and close the gap on second placed Morris. “Then I pushed too hard, made a mistake and it increased the gap,” he admitted, just holding onto third place by just two seconds, from fellow Dukeries driver Scott.  “It was that first stage that lost it for me, too cautious and twitchy under brakes,” Scott reckoned.
“O’Donovan retained fifth but was another who felt that the caution on stage one cost him dearly, while in sixth Jasper was delighted to hold his place having run half of the event with just rear wheel drive on the 6R4.  Josh Payton / Jamie Vaughan’s Mk2 Escort snatched seventh from Dukeries  Martin Hodgson / Tony Jones’ Escort after stage four, while Paul Murro / Callum Cross’s Fiesta R5 and Darrell Taylor / Dylan Thomas’ Fiesta Rally2,” completed the top 10. 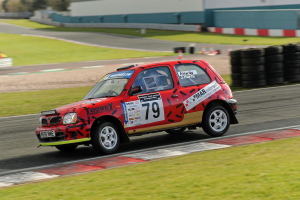 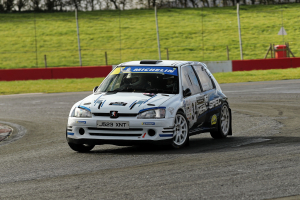 With a 15 seconds lead on the opening stage, Ben & Andrew Wilkinson’s Peugeot 106 Maxi took the Class B spoils by 1min 4 secs, with Alex Cannon / Alan Carfrae’s Fiesta R2 another three minutes up on the Mini of James Tointon / Gary Dixon. Dukeries Ian and John Dove had been third in class after the first stage, but retired their Nova on the second, while Marc Mayes / Ben Duke’s Nova completed the top four.

In the very large Class C, Josh and Tamsyn Davey’s Darrian set the pace on stage one and were ninth overall. “Then the gear 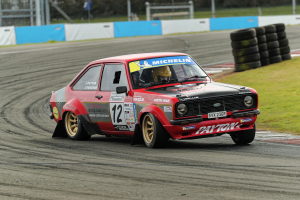 selector broke, we had already lost fourth so pulled out,” Josh explained.  Having been only third on stage one and 14 seconds off the lead Payton went for slicks on stage two, “we were braver and more sideways too,” he added.  With both Davey and the Jason & Lee Wilson second placed Darrian out with clutch failure, Payton’s lead started to grow over Phil House / Nick Beaumont’s similar Mk2 Escort.  House had to weld a broken exhaust after stage two, but was being caught by Ryan Connolly / Christopher Allen’s Ford Puma.  Josh Payton & Jamie Vaughan (Car 12) eventually won the class by almost three minutes and were seventh overall, with Connolly retaining second from Ken Sturdy / Andrew Funnell’s very smart looking Avenger and Stephen Sawley / Rob Johnson’s Escort, after House retired with a broken alternator bracket.

In Class D it was Morris from Hodgson all day, with Seamus Morris / Jarlath Kelly’s Darrian third. “I had no front brakes for a couple of stages, after oil leaked onto the pads,” Hodgson 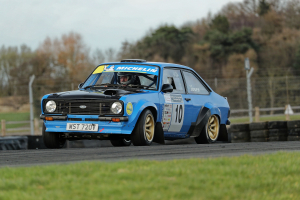 added.  “We were in the top 10 after four stages but managed to knock the ignition off, so pushed hard to try and get it back,” said Seamus after finishing 11th.

There were only two finishers in Class E1, with Nick and Crispin Williamson’s Mitsubishi ER5 heading home Dukeries Dean Hickling / Geoff Moss’s Impreza.  Stephen Johansen / Colin Stephens were victors in the Mazda MX5 class, with 31 seconds in hand over Paul Gorge / Harriet Worth.