LDV DONINGTON RALLY 2020
Frank Bird and Jack Morton in a Ford Focus WRC 07 were comfortably quickest of the 80 starters on all seven stages at Donington Park, but it was Barry Morris and Tom Hutchings (Darrian T90 GTR+) who were crowned the Motorsport News Circuit Rally Champions.

Bird went even quicker on SS2 to increase his lead to 42 seconds. “There was standing water on the first stage at the Craner Curves, but it had gone by stage two. Very slippery though and we decided to lift the ride height for the second stage too,” said Bird.  Griffiths had also increased his hold on second to 10 seconds from Woodhouse. “I preferred proper wet, not just damp,” said Woodhouse. Wells held onto fourth, “just brilliant” he said as he continues to get to grips with his new car, in only its second outing.  Hodgson had also managed to distance himself from Davey, as the latter found Smith closing on his sixth place. “No spins, no hiccups, just working hard,” said Hodgson. “We have got our misfire back so had to change the plugs,” Davey added.  Morris had moved up to eighth, with Steve/Jack Tilburn’s Escort similarly in ninth. “We were catching up after stalling at the start of stage one,” Tilburn explained. But Taylor had lost out, “we had a misfire” he explained, as he shared 10th with Marshall. Dimmack had slipped out of the top 10 after a slide onto the grass at the Old Hairpin.

Although Bird continued to increase his lead on stage three, Woodhouse had managed to match Griffiths, but Wells had started to lose touch on the leading trio. Hodgson continued in a clear fifth, but behind him Smith had ousted Davey from sixth.  Morris, Tilburn and Marshall also continued to fill the remaining top 10 places, as Taylor had more problems. “The oil warning light came on, it was only a faulty sensor, but distracting,” he said.

Over the next two stages Bird had pushed the lead to 46 seconds. “We tried a few changes in set up and they all seemed to work,” he said. Was he going to back off now? “Definitely not,” he replied. Woodhouse’s push brought him into range for a challenge for second by the end of stage five, “no major problems for us though,” said Griffiths, with two seconds still in hand over Woodhouse.  Hodgson had closed the gap on fourth placed Wells to only four seconds on SS4, but a quick response had pushed the gap back to eighth seconds a stage later. Although Davey was still suffering with a misfire, he continued to keep Smith at bay for sixth, but Morris continued to edge ever closer to both. Tilburn was still in ninth, but Taylor forced his way back into the top 10 at Marshall’s expense.

Tyres then became an issue for the final two stages, as the rain had stopped and there was almost a dry line. The lead quartet all stayed on wets for the penultimate stage and all four held station.  Hodgson opted for slicks and took five seconds off Wells, while Morris’s wet shod Darrian ended SS7 only a second down on Smith, as Davey slipped to eighth.
Bird sailed through his final stage to secure his fifth Championship victory, but there was a late change for second. “I was enjoying it so much I decided to do an extra lap,” said Griffiths. Actually he overtook a slower car approaching the split and wrong slotted. Woodhouse therefore secured second and with Wells going off at the Melbourne Hairpin, Morris completed the overall podium and became the new MSN Circuit Rally Champion.  “I surprised myself this year, I was cautious to start with today, but decided to push on a little and stayed on the same wet tyres all day,” said Morris.
Smith managed to leap to fourth too, with a second in hand over Hodgson, while Wells excursion dropped him to sixth, but it was still enough for him to become the MSN Championship runner-up. Davey climbed back to seventh, with Tilburn, Steve Finch/Sam Fordham’s Fiesta R5 and Dimmack completing the top 10, after Marshall went off and was beached on the bales.

There was only a one second gap between Chris Ruck/Steve Harris’ Opel Corsa and Ashleigh Morris/Jamie McTavish’s Fiesta in Class 2 after the opening stage. But Ruck steadily eased clear to a 1m 15s win, securing the class title and celebrating his birthday too. Morris retained a clear second with over a minute in hand over Mark Peterson/Jim Bowie’s Citroen C2R2 Max. Paul Gorge/Daniel Hurst’s Mazda MX5 was fourth, after Simon Machin/George Morrison’s Saxo retired with mechanical issues.

Despite his recurring misfire, Davey led Class 3 all day. Robin Adams/Ray Keith’s Escort led the pursuit on the opening stage, but problems on SS2 put them out of the frame and left Mike English/Andy Robinson’s Escort to consolidate the place. Cathy Sewart/Colin Stephens’ Talbot Sunbeam and Tim Gray/Steven Craggs Escort completed the top four.

There were many Dukeries MC crews who took part in the event but sadly these did not include Ian & John Dove and Mark Mazzitelli/ Pete Butler who were both late withdrawals and David Welch/ Steve McNulty (Subaru Impreza N15) who unfortunately did not get a run and remained as 1st Reserve. Of those Dukeries crews who did get to start the event there were some decidedly mixed fortunes!
Andy Fraser/ Alan Jones (Darrian T9V6) were highest seeded of the Dukeries crews after their previous asphalt rally successes but a combination of lack of recent seat time and the damp conditions meant they were not able to extract the best out of the car early on. They had just got back to setting competitive times when they retired after the penultimate stage. John Griffiths/ Nigel Wetton have already been mentioned in this report and they were in line for a tremendous result until the final stage drama, but they still ended the day 12th overall. 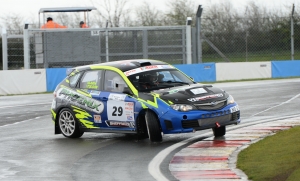 Ilaria, (Car 29) this time in John’s Subaru Impreza, were just getting used to the different car in the slippery conditions but had to retire with a gearbox issue after completing just 2 stages. Simon Belcher/ Cathy Booth (BMW Series 1) also found it very slippery on the morning stages and incurred a stage maximum on SS3 before getting to grips with the car and the conditions on the afternoon stages. 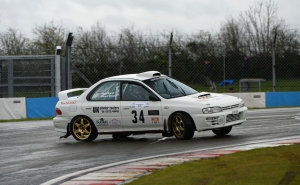 drive around Donington ‘at competitive speed’ for 3 ½ years. They finished 41st and seemed to be having an enjoyable day.  Alasdair Stables/ Neil Jones (Vauxhall Chevette HSR) unfortunately retired after completing just one stage with an engine issue.

Matt Wood/ Daniel Petrie were leading Class 1 until a large hole appeared in the engine block on stage 3. Likewise, Andy Wright/ Nigel Powell (Honda Civic EP3) were forced to retired on SS3 with a drive shaft malfunction!
Jack & Matthew Atherton in the Rainworth Skoda Fabia had a good day and finished 42nd overall. Simon Machin/ George Morrison (Citroen Saxo) were going well but had to retire with mechanical issues after SS5 whilst Paul Fearn/ Will Brown (Talbot Sunbeam) had the disappointment of a stage maximum on the very last stage to round off their day.

Report by Peter Scherer with some later additions